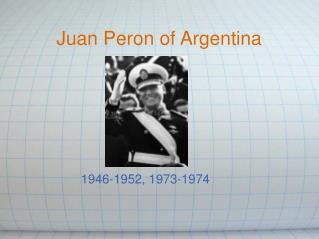 Juan Peron of Argentina. 1946-1952, 1973-1974. Background: Argentina. Located in the south of South America First trace of humans goes back to 11000 BC Incas lived there under the rule of King Pachautec In 1516, Europeans landed on the shores of the Buenos Aires colony Juan Peron 1895-1974 Argentina - . populist leader. political leader who claims to side with the common person often

Republic of Argentina - . development of a global architecture for ins based on thermal and fast reactors with the