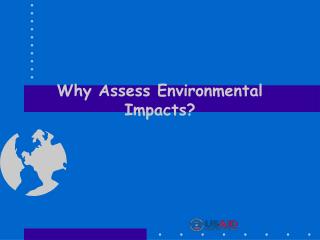 Why Assess Environmental Impacts?. Environmental impact assessment. A formal process process for identifying the likely effects of particular activities or projects on the environment, and on human health and welfare. Why did EIA start?. Environmental Impacts of Food Waste in the WCSD - . progress report by: diane shaw. 1. definition and boundaries of

So you want to start a private practice: some thoughts - . judy ripsch, ph.d., l.c.s.w. intro. intro self (who made me

Environmental Impacts on Reproductive Health: Foundations of the Science - . association of reproductive health

Environmental Law - . environmental law. “if the law supposes that, then the law is a ass, a idiot!” - oliver

Program Effectiveness Plan - . paul price abhes education advisor. the purpose of the pep. why use the pep?. how does

BIOFUELS, BIODIVERSITY AND ENERGY SECURITY: What are the environmental and social impacts? - Jeffrey a. mcneely chief