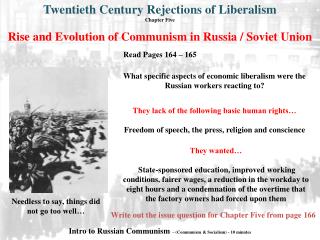 The Soviet Union and the United States - . 1917-1941. pre revolutionary russia. as we have learned from previous notes

The Rise of Totalitarianism - . two ways to keep control. vocabulary to know. totalitarianism. a system of government

CAPITALISM VS. COMMUNISM “BrainPop: Communism” video worksheet I. Definition of communism - Communism is an economic

The Russian Revolution, 1917-1921 - . from the russian empire to the union of soviet socialist republics (ussr). imperial

World War II - . the war begins. nazi-soviet pact. “there exists no real conflict of interest between germany and