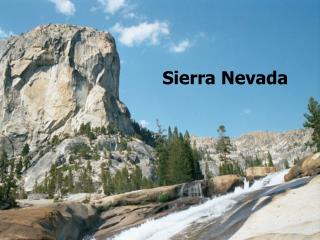 Sierra Nevada Conservancy Mission - . the snc’s mission is to initiate, encourage and support efforts that improve

Tectonics of the Sierra Nevada - . “the grandeur of these forces and their glorious results overpower me, and inhabit

Water and the Sierra Nevada - . there is science, logic, reason; there is thought verified by experience. and then there

Scales of Sierra Nevada watersheds - Fewer than 20 main rivers, each of which drains 1,000-5,000 km 2 above the mountain

Fire and Smoke Management in the Sierra Nevada - . wildland fire: our reality prior to fire suppression policies (circa