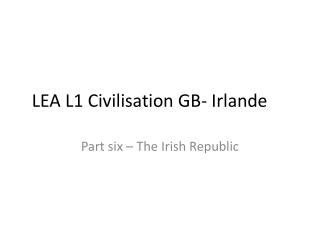 Eire- Irlande- Ireland - . the rising of 1641 cromwell’s campaigns the penal laws. the reformation and the new

LEA/Non LEA - . recognizing the importance of lea status and related issues. background. a charter school is either its

Classical Civilisation - . unit 3: greek tragedy summer work. summer reading. it would certainly help you to do some

A2 Classical Civilisation - . the next three weeks…. everyone signing on to using @ classicsaquinas introduction to the

Ch 33 The Rise of the Roman Republic - . introduction patricians and plebeians under etruscan rule the patricians create

From Republic to Empire - . western civilization november 26, 2012. agenda. how was your break? turn in chapter 3+

From Republic to Empire 5.2 - . objectives. understand how the roman republic grew through a series of conquests.

National minorities in Ireland : Gypsies and Irish Travellers - . gypsies. gypsies were thought to have left the northern