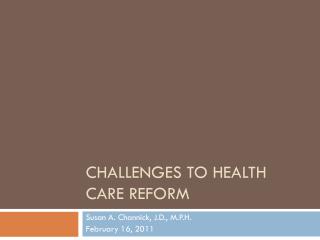 Challenges to health care reform. Susan A. Channick, J.D., M.P.H. February 16, 2011. Competing Goals of Health Insurance Schemes: Individualism vs. Solidarity. Currently, access and affordability are sacrificed to ensure excellent care but only for those who can afford Goals of Health Care Reform - . if the new president and congress decide to take on health care reform, how important is

Ready or Not-- Here Comes Health Care Reform - . presented by the colorado center for nursing excellence. why health care