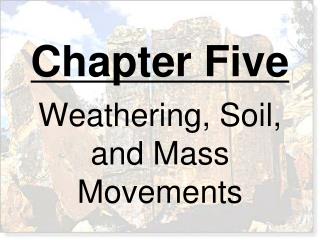 Chapter Five. Weathering, Soil, and Mass Movements. Weathering. Weathering is a basic part of the rock cycle and a key process in the Earth system. Weathering : The breaking down and changing of rocks at or near Earth ’ s surface. There are two types of weathering: Mechanical Weathering