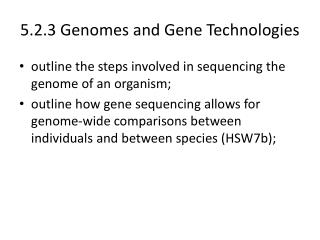 5.2.3 Genomes and Gene Technologies. outline the steps involved in sequencing the genome of an organism; outline how gene sequencing allows for genome-wide comparisons between individuals and between species (HSW7b); . Understanding DNA. Genomes &amp; Gene Organization - . 7.6. what is a genome?. “an organism’s complete set of dna, including all of

DNA and genomes - . dna and genomes. the phosphate groups have pkas of around 2 and around 7. this means dna is

Genomes and mutagenesis - . figure 9.15. the ames test relies on a mutant bacterial strain that is defective in hisg. -