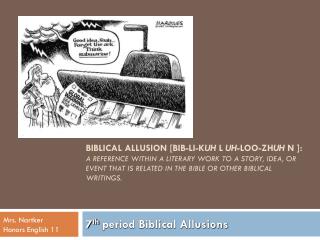 Biblical Allusion [bib- li - k uh l uh - loo - zh uh n ]: a reference within a literary work to a story, idea, or event that is related in the Bible or other biblical writings. 7 th period Biblical Allusions. Mrs. Nartker Honors English 11. The Bible. First it is divided into two parts. Biblical Allusions - . old and new testament. the bible as literature. ot—adam and eve. lived in the garden of eden, a

Understanding Biblical and Mythological Allusions - . key allusions to enhance your understanding of literature, and some

7 th Period Only - . if you have a lock and you want a top locker, get a piece of paper from mr. harbaugh . print your

Danyell Polson 7 th Period - . background. this is an ad by above the influence on negative effects of drugs and alcohol.