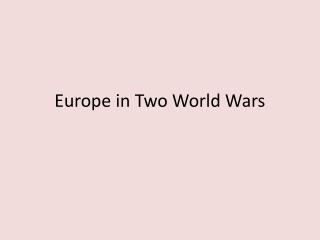 World Wars - . dissolution of empires ― austria-hungary. balkan chaos. alliances and strategies. the goals of each of

Two Wars; Two Turning Points in Greek History - . over 600 poli made up the hellenic world. spartan warriors, c. 450 bc.

Europe Between the Wars - . growth of new nations. what caused these countries to change?. president wilson’s 14 points

Europe Between the Wars: - . 1919-1939. an uncertain peace: the search for security. the failures of versailles. the

Chapter Eight English Literature Between the Two World Wars - . 1. an introduction of the general characteristics of the