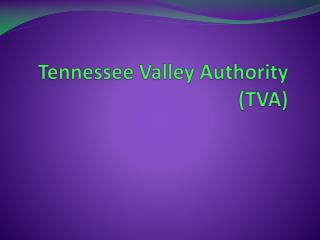 Tennessee Valley Authority (TVA). TVA. Americans began to support the idea of the government owning the utilities in the 1920’s. Most people thought privately owned power companies charged too much for power. Water Use in the Tennessee Valley - . water use in 2010 and projected use in 2035. alabama water resources conference

Tennessee Valley Authority In The 1933s

Comp. Regional Authority TVA - . imagine a place where:. 94% of property owners/98% of tenants have no electricity 30% of