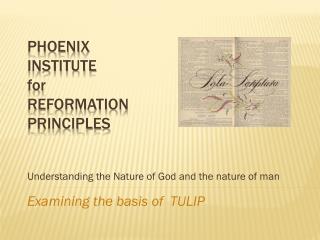 Understanding the Nature of God and the nature of man. Phoenix Institute for Reformation Principles. Examining the basis of TULIP. Primary Objective: . … is NOT to convince you of Reformed Theology! But … man has questions!. Who IS God Who IS man?. Isaiah 55:8 VOCABULARY FOR THE REFORMATION - . the reformation. a period in history when people challenged the authority of the

REASONS FOR THE REFORMATION - . too many to

Reformation - . audrius stonkus. the reformation of the 16th century was a movement within western christendom to purge

Reformation - . tek 5b: explain the political, intellectual, artistic, economic, and religious impacts of the

Reformation - . causes of the reformation. scientific advances which contradicted the church the corruption within the