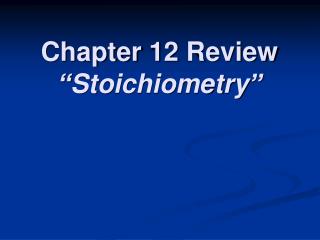 Stoichiometry Review - . what is a mole?. definitions: a mole ( mol ) is a unit used for measuring atoms, molecules, or

Chapter 12 Review - . work and energy. the transfer of energy to a body by the application of a force that causes the

Chapter 12--Stoichiometry - . 12.1 the arithmetic of equations interpreting chemical equations and mass conservation in

Chapter 12: Stoichiometry - . mr. samaniego lawndale high. problem 12.2 (moles of product). how many moles of ammonia are

Unit 12 Stoichiometry - . stoichiometry. describing the relative quantities of reactants and products in a chemical