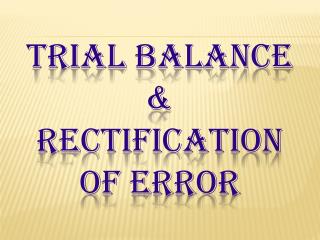 TRIAL BALANCE & RECTIFICATION OF ERROR. Trial balance. Trial balance is a statement & list of debit and credit balances , taken out from ledger , it also includes the balances of cash and bank taken from cash book to test the arithmetical accuracy of the books. . TRIAL BALANCE.

Sampling Error - . if probability methods are used, sampling is like drawing at random from a box, without replacement.

De Götzen EASY START GUIDE ERROR CODES - . if an error is detected when the system is turned on, the anomaly is

Parsing &amp; Error Recovery - . david walker cos 320. error recovery. what should happen when your parser finds an

Diode Circuits or Uncontrolled Rectifier - . rectification: the process of converting the alternating voltages and