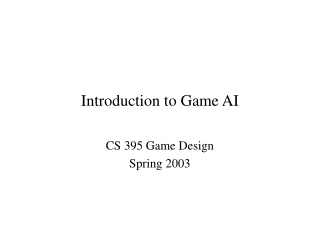 Introduction to Game AI. CS 395 Game Design Spring 2003. Expectations on term projects. Designing and implementing a full game from scratch can be too hard Exceptions: Text-based interactive fiction, arcade games, … What to do?. Solution One: Leverage. Introduction to Game AI - Opponents in classic board games. move generator figures out what moves are possible ... simon

Introduction to AI - . intelligent behavior. computer. humans. an attempt of. what is ai?. ai is the reproduction of

AI - Introduction - . bertil ekdahl respeo@telia.com. what is ai?. it is the science and engineering of making