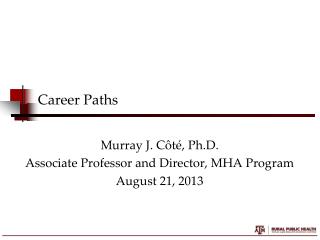 Career Paths - . stephanie weirich university of pennsylvania. what i'm going to talk about…. what is like to be an

SOCIOLOGY CAREER PATHS - Where to go with your sociology degree and suggestions on how to get there! what is a career

Career Paths in Art - Art is a vast field composed of many disciplines, ranging from music to painting, from industrial

Careers and Career Paths - . glc2o. where will you go after high school?. let’s look at the 6 options…. what are your

Careers and Career Paths - . gwl3o. where will you go after high school?. let’s look at the 6 options…. what are your

Alternative Career Paths in Dentistry - . what if i don’t want to own a business? eric childs, dds. who am i?. general

Career Paths for Hairstylists &amp; Aestheticians - . in this unit we will discover the many different career paths

Post-JPO career paths with UNDP - . eric overvest, arr mali 29 may 2002. working on your career. specialise in one of