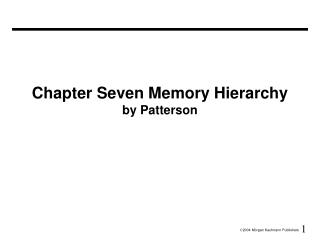 Chapter Seven Memory Hierarchy by Patterson. Locality. A principle that makes having a memory hierarchy a good idea If an item is referenced, There are two types of locality: temporal locality (locality in time ) : it will tend to be referenced again soon

Chapter 5: Cache - The memory hierarchy is our solution to a need for unlimited fast memory at least 1 instruction fetch

The Memory Hierarchy - . cs 105 tour of the black holes of computing. topics storage technologies and trends locality of

Chapter 5 Memory Hierarchy Design - . introduction. the necessity of memory-hierarchy in a computer system design is