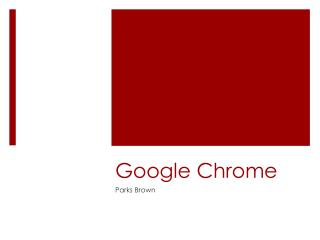 Google Chrome. Parks Brown. Google Chrome 1. Chrome is the largest web browser service in the entire world Used in 45% of the web browser market, with over 750 million users each month. First Released on September 2, 2008 to all Microsoft users, then on December 11, 2008 to the general public. whatsapp web - Whatsapp is now available on a web browser.users of the popular messaging app whatsapp can now conduct

What, Where, When, Advertising, Commerce - Google apis: search, advertising and commerce. what, where, when, advertising,

Personalizing Google Earth With Maps And Points Of Interest - . lecturer - jeff neely jcneely2@cox.net. topics how to

ELECTROPLATING OBJECTS WITH CHROME - . merve biyikli 9/a 244. what is electroplating ?. to make a metal look better to