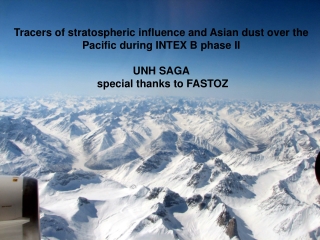 Tracers of stratospheric influence and Asian dust over the Pacific during INTEX B phase II UNH SAGA special thanks to FASTOZ. All of you on the deployment will recall extensive (excessive?) discussion about whether we were seeing strat influence in the mid and upper trop over the Pacific. MLS observations during INTEX-B: Validation and context - . nathaniel livesey and the mls team. with thanks to: dacom,

MLS observations during INTEX-B: Validation and context - . nathaniel livesey and the mls team. with thanks to: dacom,

3D Spectrography: II - The tracers - . morphology : distribution of each component dynamics : kinematics via the emission

Dust and Chlorophyll over the Mediterranean - . geoss web services (gws) interoperability demostration presented at the

Overview of the Canadian Contribution to INTEX-B