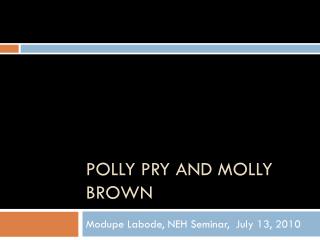 Molly Brown by Bethany - Later in life she was on the titanic , she escaped the sinking titanic in lifeboat six. early

Polly and the Wolf. - Polly and the wolf. by courtney and ffion. polly was in her house. there was a knock at the door.

Polly Apfelbaum - . apfelbaum's work is both painting and sculpture, and perhaps photography and fashion and formless

Molly Joslin - . the client. oxford st market is located in leederville. runs for 17 weeks throughout summer; open every

Molly Pitcher - . by:kyler litschgi . summary of molly pitchers life . she was born in trenton new jersey in 1754.she

MOLLY MOON - . chapter 2. i think in chapter 3 molly will try something else to cheer lucy up. chapter 4. i think they

Unsinkable Molly - . by juan nungaray. what special thing did molly do?. first of all she was on the titanic when it