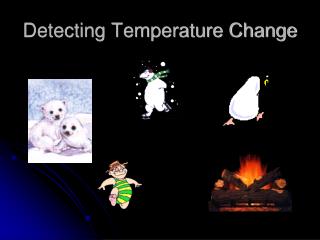 Detecting Temperature Change. External temperature change. Skin is the barrier between our body and the external environment and can be 2 or 3 degrees below core body temp Core body temp is maintained at about 37 degrees C Change in Temperature - . p. en. 04.41 demonstrate how temperature can be increased in a substance by adding energy. 4 th

Change in atmospheric temperature - . any idea ….. why?. climate change. increasing heat is because of climate

Deformation with change of temperature - . section 6. +. a.

Temperature Change With Compounds NaCl &amp; CaCl - . by kirsten, eric, and matt. question:. what happens to the

Ocean Observations for Detecting Climate Change: Society in Danger? - . global temperatures have been much higher in the

Detecting Bias - . the student will be able to…. recognize bias and value judgments in written work understand the