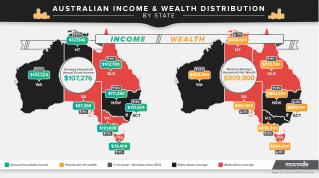 Australia has long been considered the land of the middle class, but in recent years the gap has been widening between the rich and the poor. When it comes to the battle of the states, which corner of Australia scores the highest and the lowest on the income and wealth report? Will the Baby Boomer generation continue their stronghold on our national wealth?

MOST AUSSIES HAVE THEIR WEALTH TIED UP IN THEIR HOMES, HOW DOES OWNERSHIP COMPARE WITH THE TOP, MIDDLE AND LOWER CLASSES?
The average wealth (if you liquidate everything and pay off all your debts, what are you left with) is about $800,000. The bottom 1 in 5 have a net worth of just $35,000, the top 20% of all household have a net worth of about $2,500,000. That means that the top fifth of households have about 62% of Australia’s wealth, and the bottom fifth take less than 1% of Australia’s national private wealth. So that's a big difference in wealth across these households.

WHICH STATES ARE BEST AND WORST PERFORMERS WHEN WE ARE LOOKING JUST AT INCOME?
The mining boom in WA has really done a great thing over there and so they are leading the earnings chart, with the ACT not too far behind with public servant wages doing pretty well. At the bottom of the tree you have Tasmania, earning about $50,000 less per annum, per household, than what we have in the west. Economic Justice For All: The Great Regression to Progressive Action - . we are one conference. our broken economy.

History and Logistics of LWS - Luxembourg wealth study: a progress report eva sierminska conference on the

History of the Australian Army Cadets - . learning objective. by having an understanding of the history and organisation