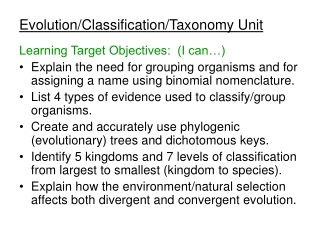 Evolution/Classification/Taxonomy Unit Learning Target Objectives: (I can…) Explain the need for grouping organisms and for assigning a name using binomial nomenclature. List 4 types of evidence used to classify/group organisms. Discipleship: An Introduction to Systematic Theology and Apologetics - . the doctrines of creation: the heights church

The Basics of Classification - . the last ppt of the year. what is taxonomy? why is it necessary to classify living

Taxonomy and Classification - . how organisms are identified, grouped and named. taxonomy. the study of classifying and

Classification - . essential question why is it important to place living things into categories?. 18.1 history of

Taxonomy - . defined as the science of classification of organisms taxonomic categories are arranged to show degree of

MY FIRST LESSON IN TAXONOMY/CLASSIFICATION AND HOW TO IDENTIFY SPECIES (KEY) - . taxonomy and classification. keeping