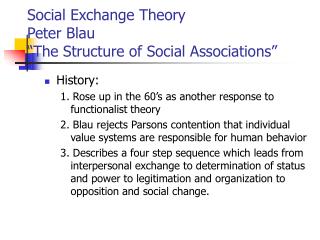 Social Exchange Theory Peter Blau “The Structure of Social Associations”. History: 1. Rose up in the 60’s as another response to functionalist theory 2. Blau rejects Parsons contention that individual value systems are responsible for human behavior

The Practice of Social Research - . chapter 2 – paradigms, theory, and social research earl babbie , the practice of

Social Exchange Theory - . by alexia brewer, alexa aiken, victoria vali , and jamie fielding. what type of theory is it?.

Social Structure and Social Interaction - . starter. in your notes, write down 5 descriptions for yourself. try to keep

Social Choice Theory - . by shiyan li. history. the theory of social choice and voting has had a long history in the

Social Interaction and Social Structure - . chapter 5. why should we choose these guys?. i. social structure = . ***

Control Theories - . control theory. everyone is motivated to break the law deviance results from weak social