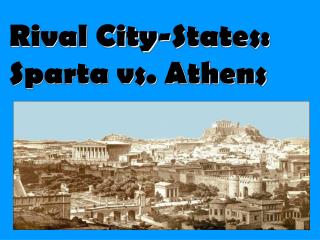 Rival City-States: Sparta vs. Athens. Athens and Sparta were probably the two most famous and powerful city states in Ancient Greece. However, they were both very different. Sparta. “Come back with your shield or on it”. Development. LOCAL GOVERNMENT – COUNTY AND CITY - . quick fire. why do you think city and county government might be considered the

OBJECTIVES - . learn how people lived in ancient sparta discover some results of the persian invasion of greece

Where is Greece? - . sunny greece is 1,500 miles from england. itâ€™s capital city is athens it is famous for its

Issues in the Comparison of Welfare Between Europe and the United States - . robert j. gordon napw iv conference, nyu