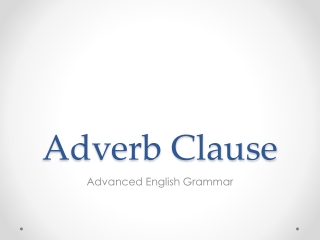 Adverb Clause - . a subordinate clause that describes the verb in the main clause – begins with a subordinating

ADVERB CLAUSE - . created by reza ajie saputra. find the adverb clauses in these sentences. you seem very happy when you

Adverb Clause - . a group of words that begins with an adverb clause signal word, has a subject and a verb, and all of

The Adverb Clause - . how? where? when? why?. to what extent? under what condition?. where can you find an adverb ?.

Clause - Lc 1.3 use subordination, coordination, apposition, and other devices to indicate clearly the relationship

Adverb Notes - Definition an adverb is a word that modifies a verb, an adjective, or another adverb adverbs answer the

The ADVERB - . by uzma minhaj. what are adverbs?. an adverb is a word which modifies the meaning of a verb, an adjective

ADVERB TEST - . mrs. phillips language arts. lazily, the dog got up and walked to his water bowl. and. which is the

Adverb Formation - . as you expected, some exceptions…. exercise 7 – change the adjectives into adverbs