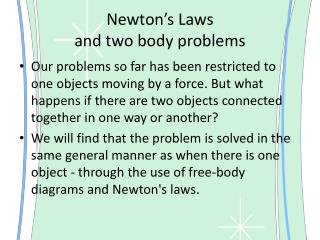 Newton’s Laws and two body problems. Our problems so far has been restricted to one objects moving by a force. But what happens if there are two objects connected together in one way or another? Criminal Laws - . here’s what we’ll learn in this unit:. criminal laws are complicated types of crimes elements of a

Characteristics of Students with Behavior and Learning Problems - . chapter 4. etiologies of bd/ld/mmr. biology: