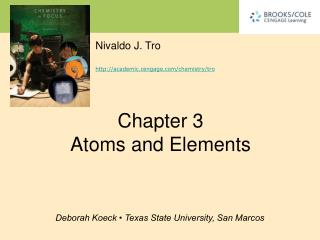 Chapter 3 Atoms and Elements. Understanding the Macroscopic World. The connection between the microscopic atom and the macroscopic element is the key to understanding the chemical world. Atoms. An atom is the smallest identifiable unit of an element. CHAPTER 2 BASIC ELEMENTS OF C++ - . the basics of a c++ program a computer program or a program is a sequence of

Counting Atoms and Balancing Chemical Equations - . elements, compounds, mixtures. hydrogen is an element. oxygen is an

The Chemistry of Life - . part i – macromolecules and carbohydrates. atoms and elements. physical world composed of 92