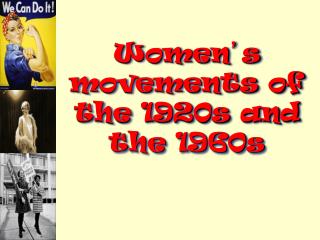 Women in the U.S. military - A look at women who serve in america's military, as the first two women soldiers make

The 1920s - . the jazz age normalcy and good times the great depression begins. continued on next slide. rise in racism

1920s Inventions - . inventions quick write. list 5-7 technological advances introduced in the past 20 to 30 years. what

1960s - . this was the most dangerous decade. a summit was planned for may 1960 to discuss berlin and nuclear