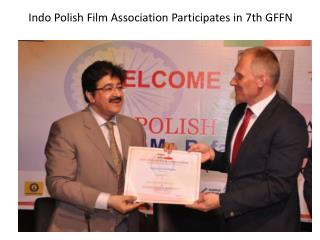 Indo Polish Film Association will support 7th Global Film Festival Noida 2014 fixed for 11th to 13th of November at Noida Film City. “Not only films we are expecting from Poland but also film makers from Poland during 7th Global Film Festival Noida 2014” said Sandeep Marwah President of GFFN. History has been written when first time a joint venture between India and Poland was created under the banner Indo Polish Film Association and launched by the Hon’ able Marshall H.E.Rafal Jurkowlaniec during his visit to Noida Film City in India. Indo Assignment - . by lachie wilde. location compared to australia. indonesia is north west of australia. how many

Polish … - . art has always been a big part of our lives. by art we can