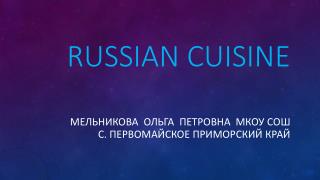 Singapore Food - . chinese cuisine. many of these dishes were adapted by early chinese immigrants to suit local

Chapter 14: World War I &amp; The Russian Revolution - . section i: the great war begins. many saw the world as a

The Russian Avant-garde: Experiments in Abstraction - . purpose. when the new century came, the quest for national

RUSSIAN BUSINESS CULTURE - . new features. gone are the times when you could be screwed up at any corner, nowadays

Why is skin-to-skin so important? - . picture from amwidström, with permission. louise dumas, rn msn, phd for the

Russian Revolution - . warm up -examine the photo and answer the following questions. objective: tlwbat to analyze how