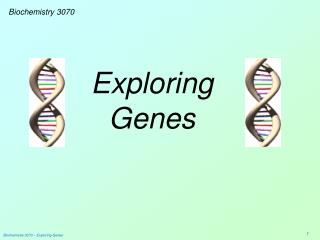 Biochemistry 3070. Exploring Genes. Recombinant DNA Technology. Recombinant DNA technology has revolutionized biochemistry since its inception in the early 1970’s. Utilizing enzymes that cut, join, and replicate DNA and/or RNA is a key concept in modern chemical and biological laboratories. EXPLORING DEAD GENES - . adrienne manuel i400. what are they?. dead genes are also called pseudogenes pseudogenes are non

exploring links between evolution and development: the Hox genes - . overall motivation: when a new form evolves, the

Genes - . the inherited “instructions”. what is a gene?. a section of dna that codes for a particular protein can be

Genes - . what is a gene?. a gene is a working subunit of the dna molecule that contains information on protein

Genes - . genes. notes: a gene : is a section of a dna molecule, and it carries information for the construction of a

Genes - . a gene is the entire sequence of dna bases responsible for the synthesis of a protein. a mutation occurs when

The Genes, the Whole Genes, and Nothing But the Genes - . jim kent university of california santa cruz. ben franklin -

Homologous genes - . genes with similar functions can be found in a diverse range of living

SNC2D Genes - . did you know?. the source of  smelly feet , like smelly armpits, is  sweat . and people sweat