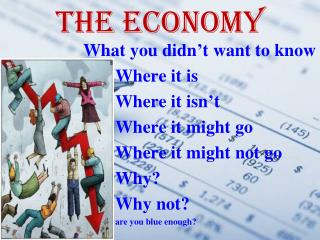 The Economy. What you didn’t want to know Where it is Where it isn’t Where it might go Where it might not go Why? Why not? are you blue enough?. Some people who majored in economics:. Gerald Ford Ronald Regan George Bush, Sr. Sandra Day O’Connor Arnold Schwarzenegger The Economy - . we are all looking for solutions which will make our business more efficient productive profitable. the

The Economy - . experience. danai giwa january 22 nd , 2014. what is the experience economy?. the next economy following

The Economy - By: amy r. kristen t. madeline f. the economy. along with some science, technology, and society. unit

The ECONOMY - . the economy - a system by which goods and services are produced, sold, and bought in a country or region.

THE ECONOMY - . the economic theory that a country becomes strong by building up its gold supply and increasing trade

The Economy - . the nature of sources and evidence. industries. the main industries of the vesuvian towns were based on

THE ECONOMY - . poll: economy outpaces war on list of voters' worries. what's the big issue going to be for 2008?

The New Economy Slides: The Goldilocks Economy - . we discussed the fact that increases in productivity growth rates