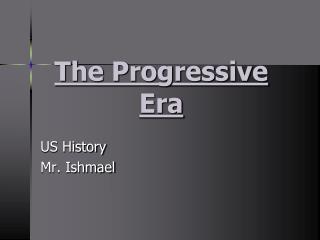 The Progressive Era. US History Mr. Ishmael. Section 1: Objectives. By the end of this lesson, I will be able to: 1. Explain the four goals of progressivism 2. Summarize progressive efforts to clean up government The Simple Present Tense in Contrast to the Present Progressive (Continuous) Tense - . by patricia galien

The Progressive Movement - . “the muckrakers are often indispensable to society but only if they know when to stop

Grammar - . progressivecontinuous. to be in the middle of doing an action. progressive. (person) be (verb)+ing. clap.

Integrated Business Planning - . how to best meet your mission. presented to the association for progressive