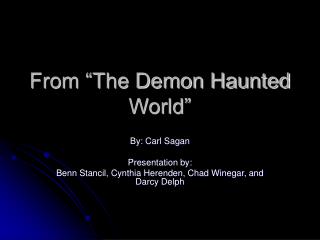 From “The Demon Haunted World”. By: Carl Sagan Presentation by: Benn Stancil, Cynthia Herenden, Chad Winegar, and Darcy Delph. Demons were thought to exist throughout the ancient world “Thought of as natural rather than supernatural beings” World War 2 - World war ii (ww2) was a global military conflict which involved a majority of the world's nations,