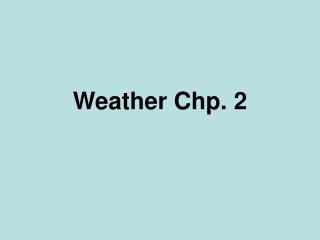 Weather - . clouds and precipitation. have you ever just looked at clouds?. why do we have clouds? why are there

Can we Predict the Impact of Observations on 3 to 6 day Winter Weather Forecasts? - Masters thesis defense may 10, 2007

Air Weather and Climate - . chapter 17 apes march 2009. what do you know about weather?. weather vs. climate. what is

Air, Weather, and Climate - . earth’s atmosphere. compared to the size of the earth (12000 km), the atmosphere is a