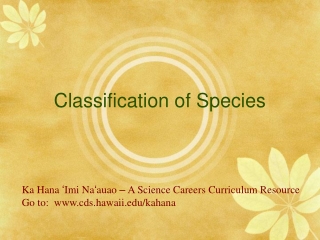 Classification of Species. Ka Hana ‘ Imi Na ‘ auao – A Science Careers Curriculum Resource Go to: www.cds.hawaii.edu/kahana. Classification Rules. All organisms have 7 names describing them. But only the last 2 names are the scientific name. CLASSIFICATION OF SPECIES - . classification of species. what is taxonomy? who developed the system? how does the system

Biological Classification- How Many Species Exist? - . biodiversity is the variety within and among living species.

Adaptation of Species - . a look at how climate change is affecting animal species like birds and butterflies.

Evolution of species - . cladistics. a simple and objective way of constructing phylogenies (phylogenetic trees) focus on

Origin of Species - . key questions:. how do existing species give rise to new species? how do species diversify? what

Species of PA - Honors biology matt jaworski. species of pa. endangered species -any species of plant, animal, or other

Evolution of Species - . evolution of species. species have the ability to interbreed and produce fertile offspring in

Distributions of Species - . how do we represent, methodologically, the distribution of species on the earth? 2. what