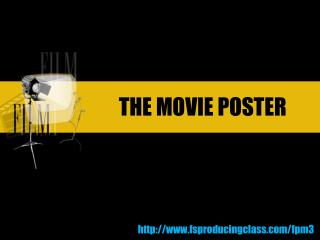 THE MOVIE POSTER - . movie poster history. although considered a relatively new medium to most, the movie industry has

Movie Poster (re)Design - . using adobe indesign , recreate a movie poster from an existing movie you have seen or a made

The movie poster of Rabbit Proof Fence - . gabby and kayle. a list of everything i see. -three children (girls) -bird

How to Make a Movie Poster - . it’s not as simple as it looks…. how to start…. three questions to ask yourself:

Movie Poster made by the movie studio to display in a movie theatre or use for promotional purposes - . digital