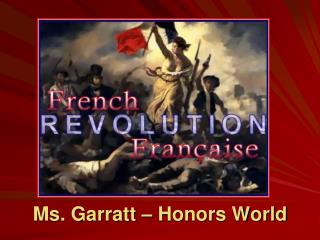 Ms. Garratt – Honors World. Before the revolution French society and government was known as the Ancien Regime All the French belonged to 1 of 3 estates. First Estate - Clergy. Only .05% of the population but owned 10% of land Paid no direct taxes or taille but collected tithes Bell Ringer Welcome to Honors World History! - . why is history important? write down homework . bad behavior: you do

Why You Can’t Say “NO” to Honors - . a guide for students. judith k. winn school of honors what we are. a n