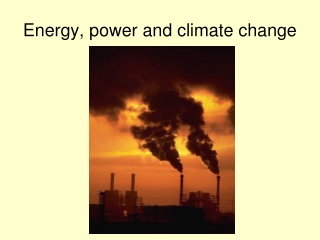 Energy, power and climate change. Great website. Hyperlink. 8.1 Energy degradation and power generation. 1. Hot gas will cause the piston to move. 2.But one stroke of the piston does not provide much energy. 3.The process needs to be cyclical. Cyclical processes. Energy, Power, and Climate Change 8.5 Solar Power - . s olar e nergy.  recall that the energy of the sun is

Climate Change and Energy - . what can small communities do to help?. ken mitchell, ph.d. energy and climate change

Energy, Power, and Climate Change 8.9 The Greenhouse Effect - Fyi: a photon of the &quot;wrong&quot; energy will