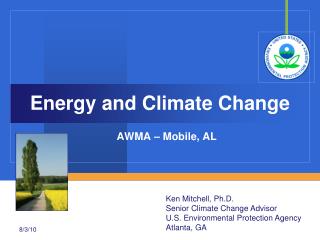 Energy and Climate Change. AWMA – Mobile, AL. Ken Mitchell, Ph.D. Senior Climate Change Advisor U.S. Environmental Protection Agency Atlanta, GA. Today’s points of discussion…. Climate Change – what is it, why do we care about it? What is the connection to energy? TACKLING CLIMATE CHANGE - . one tonne at a time. a presentation to the standing senate committee on energy, the

Climate Change and Energy Efficiency How you can save money and the environment - . laura thompson assistant sustainable