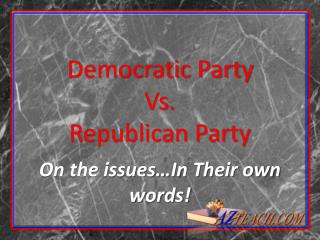 New York's Caribbean street party - The j'ouvert party is followed by the west indian day parade, which attracts some one

DO NOW - . what was the populist party platform? look in your notes and read your textbook on page 221 under the section

CLUB/PARTY DRUGS - . overview of popular club/party drugs, their side effects and what to look for:. presentation

17-4 Progressivism Under Taft - In 1912, the republican party splits at it convention: why did they support or oppose

POLITICAL PARTIES - . chapter 11. goal of political parties:. to get candidates elected! to mobilize voters and their