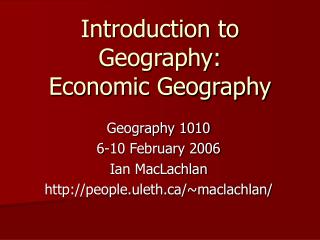 Political Geography - . where are states located? where are boundaries drawn between states? why do boundaries between

Unit 1 Geography - . activity 1 what is geography about?. what kinds of topics are covered in geography?. list 10

Strands in the Study of Geography - . (final) end of year project: 05/22/14. create a game about world geography. game

Introduction - . the main concerns of geography may be summarized by the words ‘place’, ‘space’ and