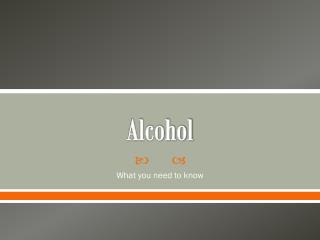 Alcohol. What you need to know. What is Alcohol?. Alcohol is a drug It can lead to serious harm when abused It can lead to health problems and injury to the user or others It can cause dependence, overdose, and even death Alcohol is produced by fermentation ALCOHOL - . intermediate 1 biology unit 1 – health and technology. introduction. a drug is a substance that alters the

Alcohol - . alcohol is a drug. this is the most commonly used and widely abused psychoactive drug in the world. been

Alcohol - . mr. read. bell ringer. when was the last time you saw alcohol in the media?. what is it??. ethanol – the

Alcohol - . alcohol. 2/3 of adult population drink many minors also drink, which is illegal average age for children to

Alcohol - . it affects you and others . choices. definition of choices: “an act of selecting or making a decision when

Alcohol - . alcohol related accidents is the number one cause of death among teenagers!. alcohol. alcohol is considered a

Alcohol - . chapter 22. facts about alcohol. ethanol is the type of alcohol in alcoholic beverages produced both

Alcohol - . alcohol is a drug. a drug is a chemical substance that is taken to cause changes in a person’s body or

ALCOHOL - . guided notes. alcohol. ethyl alcohol used also in antifreeze! alcohol is the most abused drug in the world!.

Alcohol - . is alcohol illegal or legal. alcohol is legal because you can buy them from supermarkets, liquor stores and

Alcohol - Please take a seat. we will start right away. . ask yourself this question- “in what ways has alcohol had a

Alcohol - . all the details. what is alcohol?. a liquid, produced by the fermentation (aging) or distillation

Alcohol - . by pat and corey . introduction