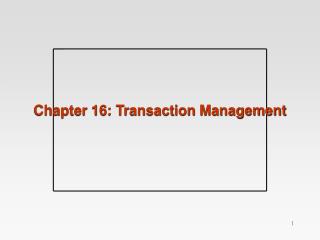 Transaction Management, Concurrency Control and Recovery - . chapter 22. overview. what are transactions? what is a

Figures in Chapter 1 - . learning objectives. after studying this chapter, you should be able to; define logistics and

Human resource management Chapter 17 - . introduction. in this lecture we will: introduce and explain the concepts and