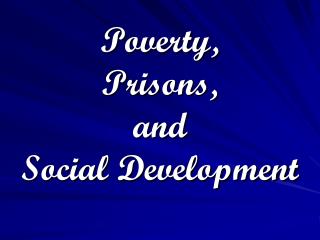 Poverty and Development - . addressing poverty and inequality. socialism and communism -redistribution of assets,

Poverty and Economic Development - . what do you think poverty means and how do you recognise it? think about some of

Poverty, Inequality and Development - . chapter 5(a), 9(b). poverty. poverty is a critical problem faced by the global

POVERTY, HEALTH AND SOCIAL EXCLUSION - . what contribution can sociology make to an understanding of poverty and its

Social Inequality/Poverty - . what does a woman on welfare look like? ethnocentrism and middle class bias horatio alger

Catholic Social Thought and Poverty - . some reflections for the 1st working group meeting on the caritas global anti-

Catholic Social Teaching and Poverty - . the competence to see and the courage to act. hopefully, reactions…. what from