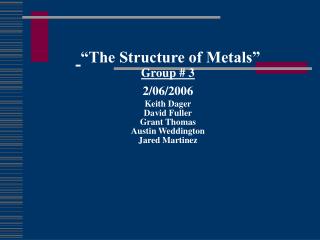 “The Structure of Metals” Group # 3 2/06/2006 Keith Dager David Fuller Grant Thomas Austin Weddington Jared Martinez. Introduction. Many questions about metal can be answered by knowing their ATOMIC STRUCTURE (the arrangement of the atoms within the metals). The Crystal Structure of Metals. 14.5 Forgeability of Metals – Forging Defects - . forgeability generally is defined as the capability of a material to

Unit 3 - . acids, bases and metals. menu. to work through a topic click on the title. acids and bases salt preparation

Structure, Properties and Bonding of Organometallic Compounds - . dr. christoph jan.2012. what is “organometallic