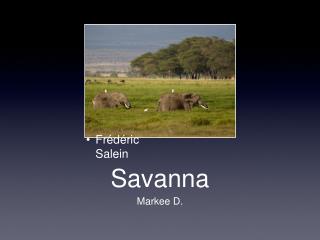 Frédéric Salein. Savanna. Markee D. Location. Savannas can be found over most of Africa, India, parts of South American, and the upper part of Australia. Close to the equator staying between the tropics of cancer and capricorn regions (defenders). Markee D. Savanna Climate. Savanna - . regions of africa. savanna. a savanna is a rolling grassland scattered with shrubs and isolated trees not