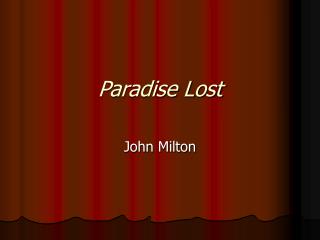 Paradise Lost. John Milton. Lines 1-49. Examine the narrator's invocation (lines 1-25) and his epic question and answer (lines 26-49). What is the source of the narrator's authority? Paradise Lost - . epic: a long narrative poem telling about the deeds of a hero and reflecting the values of the society

Paradise Lost - . john milton. tasks. everyone must read the “intro.” and “summary” from shmoop.com (friday)