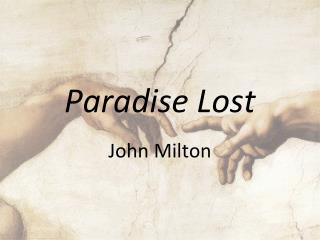 Paradise Lost. John Milton. Paradise Lost. Standard conventions of epic form Invocation to the Muse Begins story in medias res Writes in an elevated style on a grand subject. The Fall of Satan. This excerpt is from the beginning of Milton’s epic poem of over 10,000 lines.

Paradise Lost - . john milton. tasks. everyone must read the “intro.” and “summary” from shmoop.com (friday)

Paradise Lost - . epic: a long narrative poem telling about the deeds of a hero and reflecting the values of the society